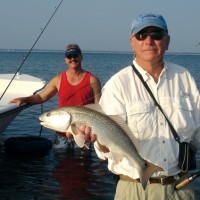 Our fishing the last few weeks has been interesting to say the least. After seven straight days of drifting clients I was able to get back in the water. Drifting as I have said many times before can be extremely difficult if the wind does not cooperate.

During the seven days I drifted I was able to fish with some outstanding clients and enjoy their many stories. The highlight of one days drifting was the prolonged fight by one lady angler of TWO LARGE JACKS! After fighting one jack for two hours and ten minutes we lost the fish at the boat. I must say for a junk fish the angler was broken hearted not being able to get a photo with her combatant. Not to be disappointed later the same day we got her hooked up again with a large jack. After one and half hours she relinquished the rod to her husband. One can only enjoy the fight of a freight Train for so long. The battle continued another hour only to end in same way as her first, a break off at the boat. I can only say she was a real trooper to fight 20# plus jacks in excess of three hours the same day. She and her party did land some keeper trout and one large red for their efforts.

The last eight days has found me able to wade and stay on the fish. I was able to fish three days with my good friends from Bay City. Mitch ( D.B.) Greg ( PUDDEN! ) and Jim ( DAD-DEEEEE) These three anglers have fished with us the last four years and have become great friends. It is a real joy to watch good anglers catch fish for the fun and photograph them before release. For those who may not have read our reports earlier this year, Greg is the angler who caught two trout over ten pounds only to photograph them and release them. His photos are on our photo page 2003 near the bottom. These guys fish hard and get the results. Not to be out done by Greg this trip Mitch landed a nice 27″ plus trout and a number of large reds the past few days.

Prior to Saturdays front I fished another group of anglers that were outstanding fishermen. Friday our rough count was in excess of 150 trout were caught and released. Granted most were small fish but they were able to take some nice fillets home.

With our transition starting look for the trout to turn on and stage along shorelines that have immediate access to deeper water. The fish are currently holding on the backsides of small points on the down wind side. This pattern is one I rely on most during this time. When I say small point, it can be a three-inch rinse from the surrounding areas. A key point make sure you fish the DOWN WIND SIDE thoroughly. The fish with be schooled tightly. Bone, T.T.K. as well as purple when the water sands has been the baits to go to.

Look for the next few weeks for the fish to go on a fall feeding frenzy, in anticipation of cooler weather.